While the idea of a public library had been talked about by the residents of Brooks, no serious discussions were held by any groups until 1949. At the December 1949 meeting of the Junior Chamber of Commerce (the Jaycees), Misters Yoshito (Winky) Kimura, Roy McNair, and Ed Jahraus presented a preliminary report on the feasibility of creating a local library. The Restroom Society (a local service club) also expressed an interest in incorporating a reading room and library with its own building which was to be built in 1950.

A committee was formed, and general meetings were held to convince the public of the value of a community public library. On April 18, 1951 the first Brooks Public Library Board was formed. The Brooks Public Library opened its doors for the first time on March 10, 1951. Established with the fundraising efforts of the Jaycees, the library initially had a budget of $300.00. The library was located in the basement of the County Rest Room. 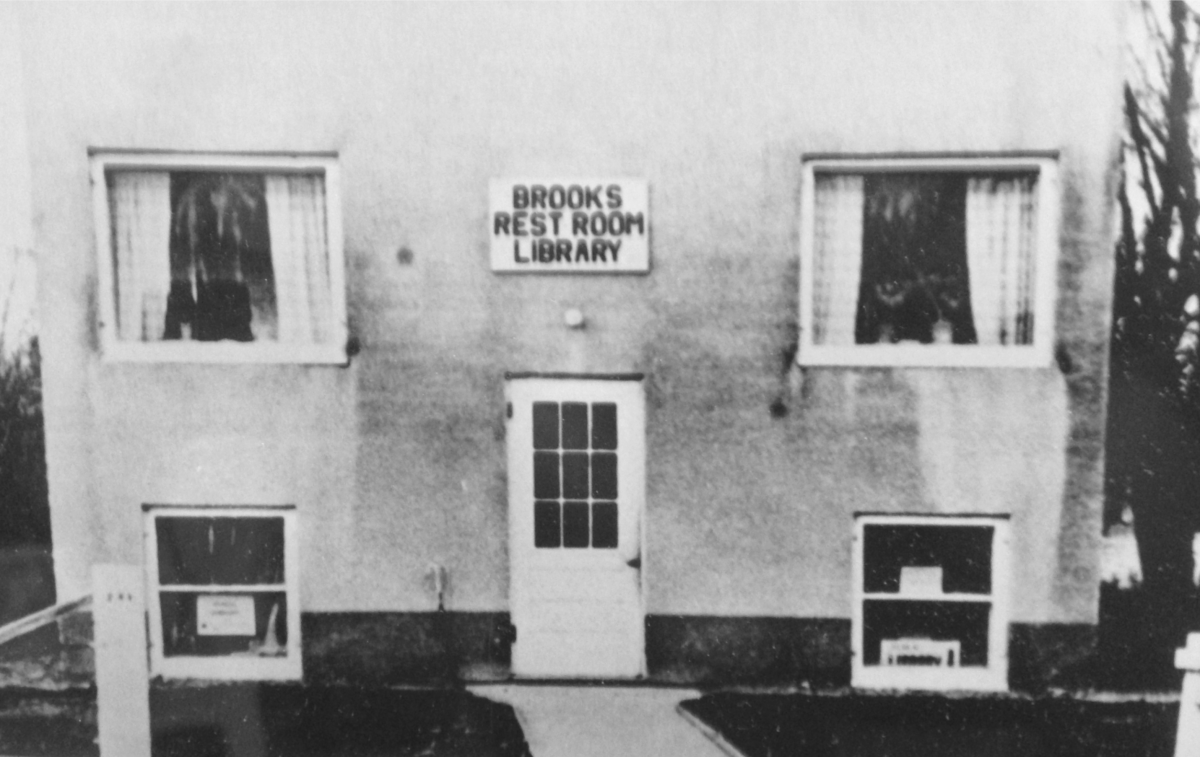 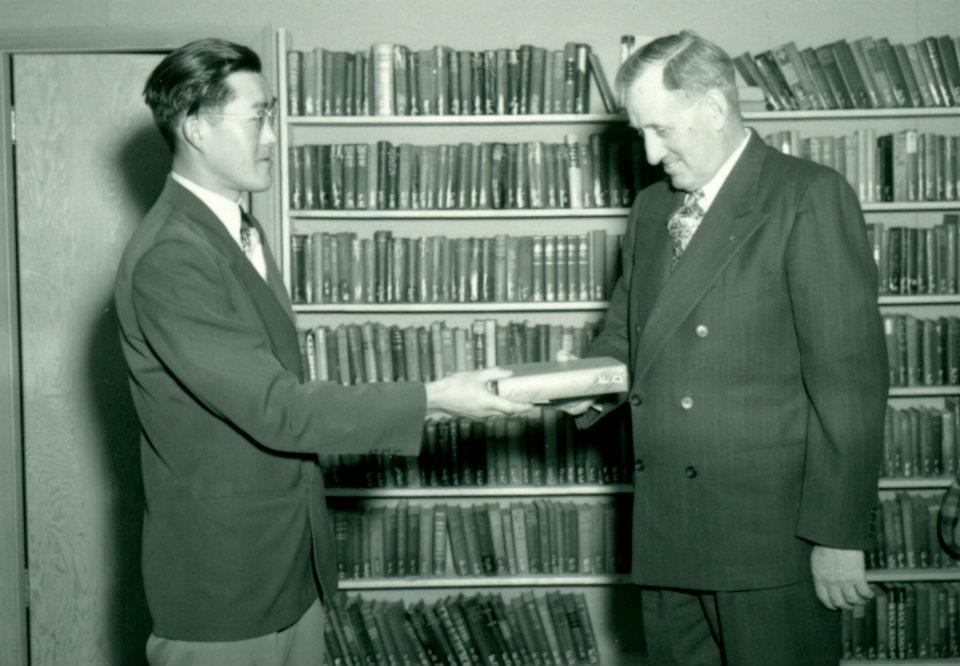 The Brooks Public Library opened its doors for the first time on March 10, 1951. Established with the fundraising efforts of the Jaycees, the library initially had a budget of $300.00. The library was located in the basement of the County Rest Room. The library had a starting collection of 2000 books, half of which were supplied by community members while the remaining 1000 were donated by the Medicine Hat Public Library. George Bolton and his wife Margaret were hired to be the caretakers of the Rest Room building, and Mollie Gray, Fay Marcy, and Ellen Martin volunteered their time to act as librarians.

The Brooks Public Library received a certification of incorporation on April 23, 1957, providing the Brooks Library Board with the authority to act as a corporate body. A few years later, the town of Brooks enacted Bylaw No. 470 which officially established Brooks Public Library as the town’s municipal library. During this time period, the library hired Margaret Bolton to act as Head Librarian. In 1962, Robbie Best took over the post of Head Librarian.

On February 2, 1967, Brooks Public Library opened in its second location under the supervision of Head Librarian Orelee Grosfield. The new building was the former Clancy School, which had previously been used as a health unit and a Scout Hall. In 1970, Karen Armbruster was hired to take over as Head Librarian.

On August 1, 1974, the library moved a third time into the newly constructed Town Civic Building. At this time, the library had a collection of 8,000 books and 2,600 registered patrons. Membership was free to residents of Brooks and non-residents paid a fee of only $5.00. Patrons were, however, limited in the number of books that they could take out: only four items were allowed per patron. Overdue items cost $0.05 per day to a maximum of $2.00 per book. By 1980, the Town and County had a combined population of 14,850 people and 6,179 of those people had library memberships. 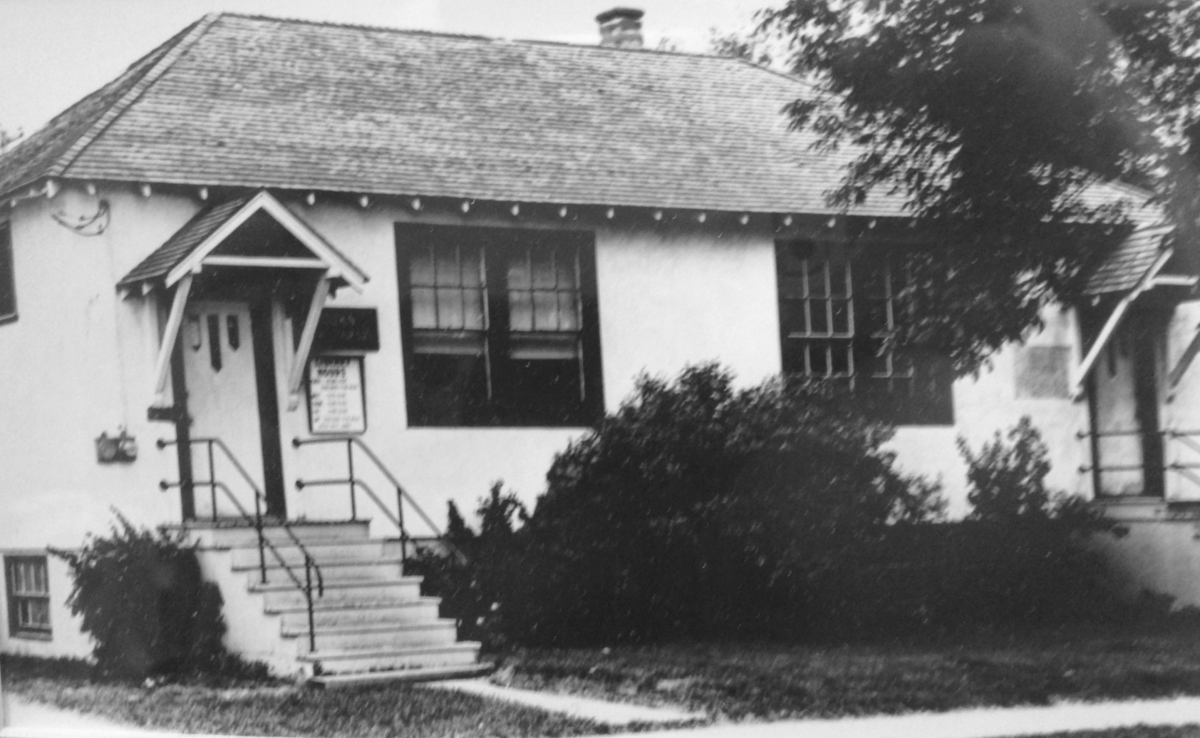 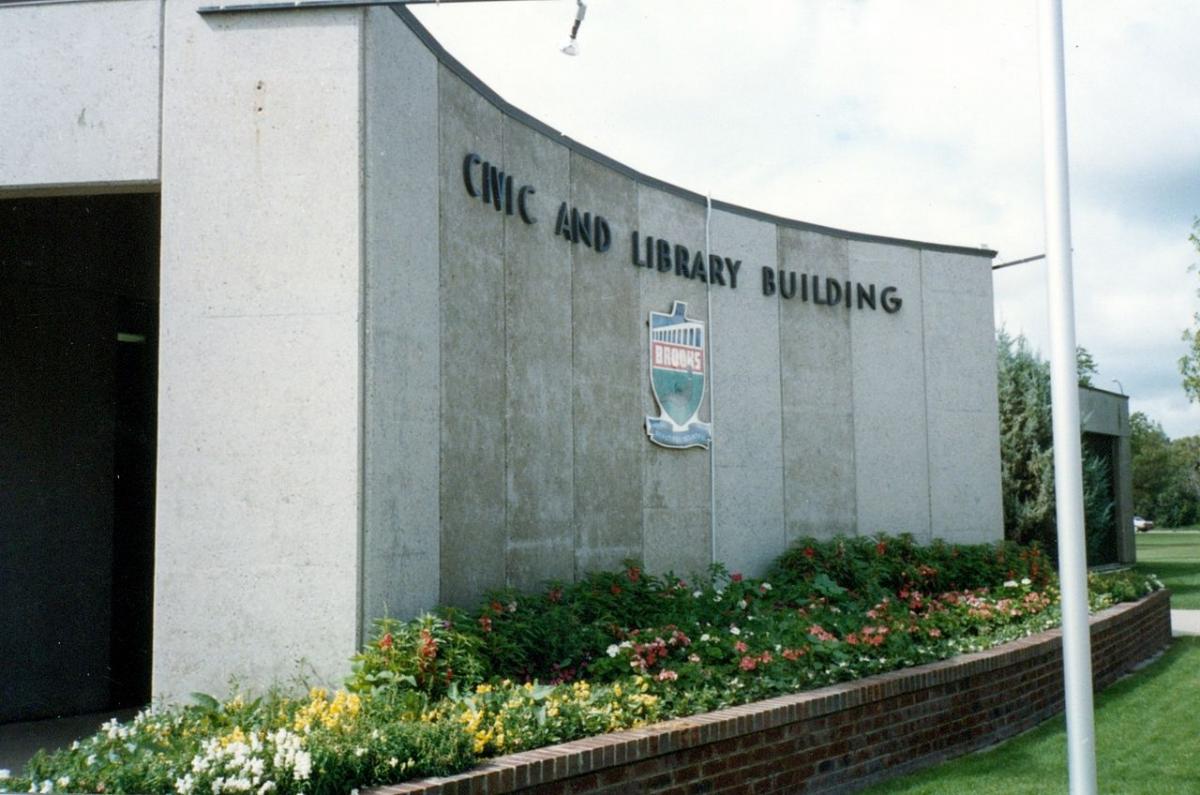 In 1988, the municipalities of Brooks, Medicine Hat, Redcliff, Foremost, Bow Island, and the County of 40 Mile formed the Shortgrass Library System (SLS). The municipality of Brooks put in a bid to have Brooks become the home of the future SLS Headquarters, but after much deliberation Medicine Hat was chosen instead with Medicine Hat Public Library established as the SLS resource centre. At this time, non-resident memberships increased to $35.00 per individual and $50.00 per family, with the cost being set by the Shortgrass Library System.

Also in 1988, the Brooks Library Foundation was formed to raise funds for a library expansion. Cramped quarters in the Town Civic Building meant that the library staff members were using Town Council chambers as a makeshift programming room and there was no room for expansion of the collection.

In 1993, Brooks Public Library moved to the former Eastern Irrigation District (EID) office building in Evergreen Park. A total of $300,000.00 had been raised by the Brooks Library Foundation to help facilitate the move including renovations. The new building increased square footage from 5,000 to 8,000. The grand opening took place on June 30, 1993.

In the early 1990s, provincial funding to libraries decreased and municipal funding was frozen by the town of Brooks. In 1994, the Brooks Library Board made the decision to begin charging $12.00 for individual memberships. A few years later, a family membership fee was added at a price of $18.00.

In 2000, Karen Armbruster chose to retire after serving the library for thirty years as its Head Librarian. Laura Taylor was chosen as her replacement and stayed for a period of nine months. In October of 2001, Julia Reinhart moved from Ontario to take over the helm. 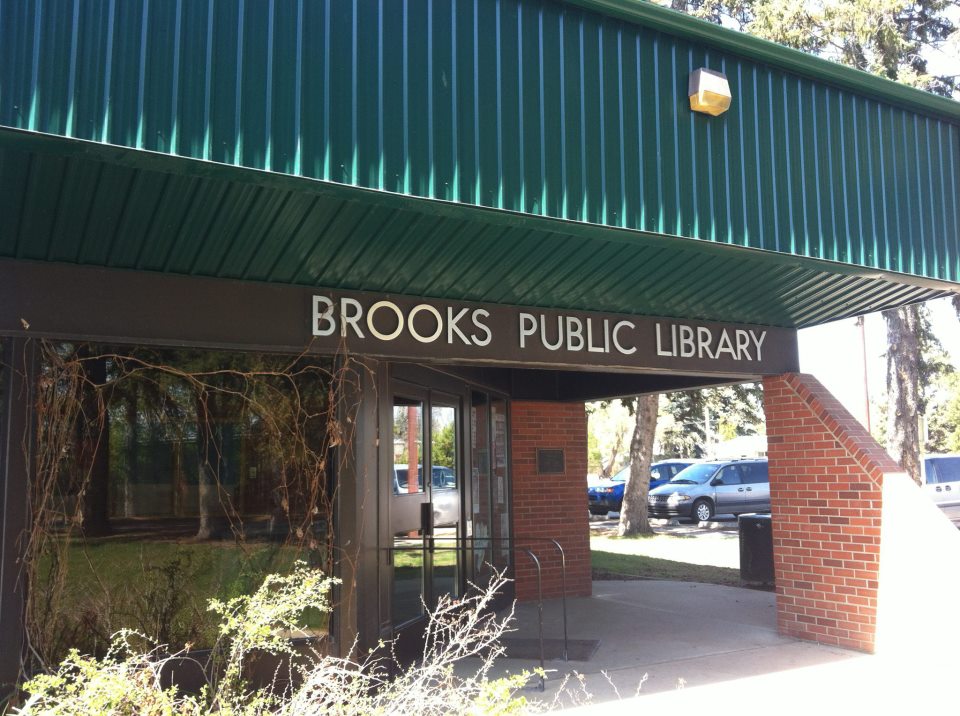 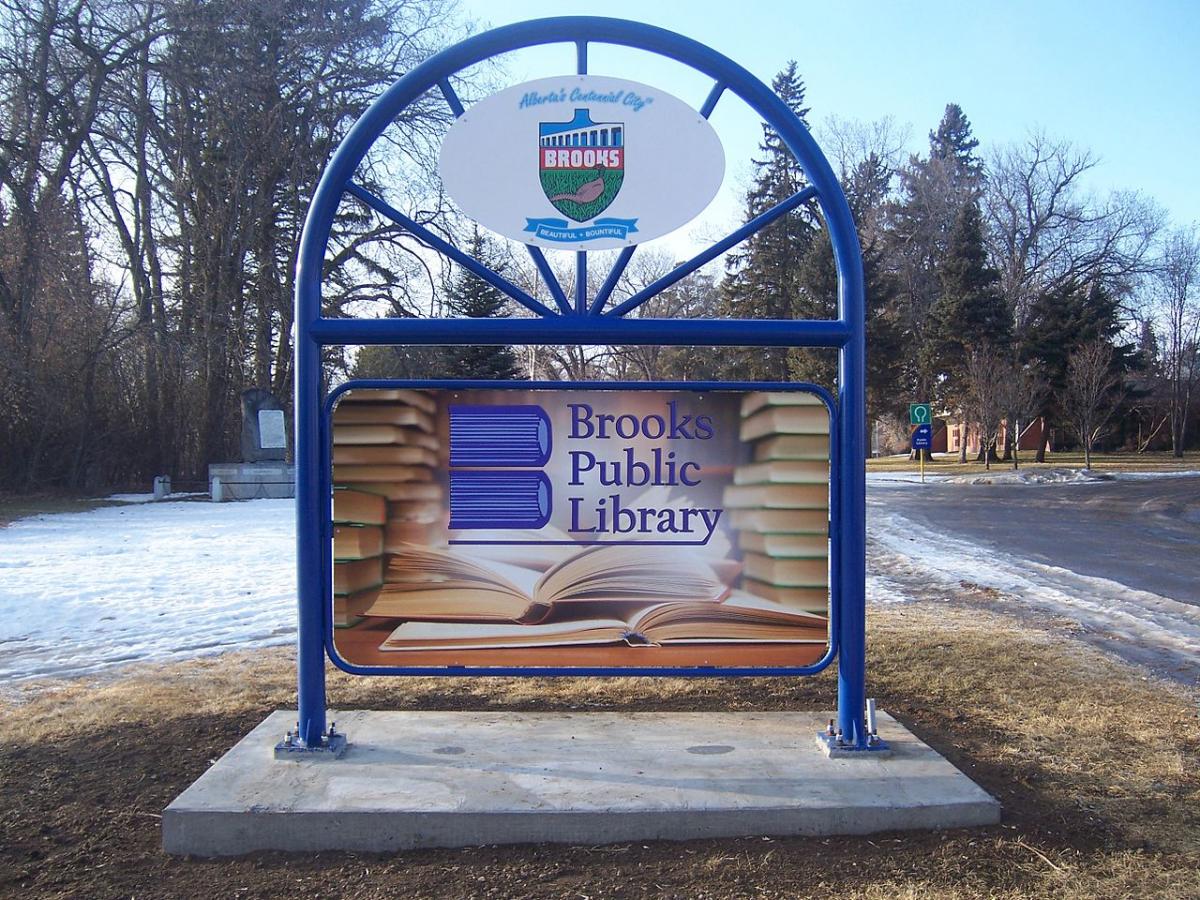 The next few years saw a rapid increase in the use of the library’s computers and Internet services. The establishment of the Alberta Supernet in 2005, a service that provided all Alberta public libraries with high speed Internet, added to the demand for the libraries’ computer services. Programming also developed rapidly at this time, particularly in 2003 with the development of the annual Medieval Faire.

In 2003, Alcoma Community Library, Bassano Memorial Library, and Rolling Hills Public Library joined the Shortgrass Library system. Non-resident fees again increased at this time, jumping to $60.00 for an individual and $80.00 for a family membership. At this time, The Alberta Library (TAL) was also developed. Brooks Public Library joined The Alberta Library initiative, allowing their patrons to apply for TAL cards that could be used at libraries across the province.

In 2006, Julia Reinhart was offered the position of Public Services Librarian at Shortgrass Library System. Shannon Vossepoel, a former CAP intern for Brooks Public Library, took over as Head Librarian.

In 2012, Sarah McCormack became the Head Librarian, overseeing building and brand renovations. In 2014, George Hawtin was named the new Head Librarian - the same same day that the City of Brooks announced their plans to build a new library space into the expanding Lakeside Leisure Centre project.

Lisa Patton became the Library Manager on August 1st, 2015. On May 1st, 2017, Brooks Public Library reopened in their new home inside the JBS Recreation Centre. 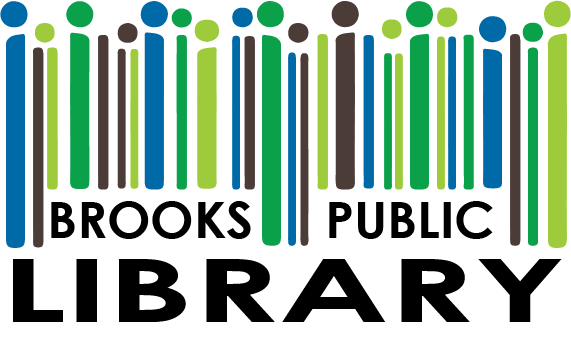